It’s no secret that in today’s economic environment businesses have to be selective with their operational investments. Often times it seems that if a program isn’t able to show an immediate increase in revenue, it’s the first to be cut. This was certainly apparent when reviewing results from Shred-it’s 2014 Information Security Tracker.

This year’s Security Tracker suggests that more than a quarter of American businesses have no protocols for storing and disposing data. This number is alarming, especially considering new stats show the cost of a data breach is pushing the $6 million mark1.

Overlooking information security won’t save money in the long run. Often, the costs incurred from regulatory fines, litigation, fraud and most importantly, the reputational damage that can result from a data breach, far exceed the cost of implementing a simple information security protocol.

For these reasons, cheque out the Small Actions for Big Wins Information Security Checklist. The checklist outlines the most commonly overlooked information security practices to help businesses easily and affordably protect themselves from information theft and fraud.

You can download the Small Actions for Big Wins Information Security Checklist here.

1. Fight Fraud by Focusing on Your Office’s Most Vulnerable Areas

Many business leaders don’t know that one of the biggest sources of fraud comes from within the business itself. As a result, they often overlook key areas of vulnerability.

This year, to mark International Fraud Week, we’ve indentified the top five most vulnerable areas within an office. The goal being to set business leaders up for success, so they can easily protect themselves and their customers.

The top five most vulnerable areas include:

As businesses move to improve employee satisfaction, productivity and work-life balance, there has been a significant shift towards remote working arrangements. In fact, over 30 million American’s work from a home office at least once a week2.

While many employers recognize the positive effects of a flexible work program, business leaders should be aware that this trend could have adverse effects on information security. Organizations need to be wary of allowing confidential information to leave the workplace and ensure all staff are mindful of data security risks when working from home.

From encouraging staff to return confidential documents to the office for safe and secure disposal, to outlining best practice with respect to handling corporate devices such as laptops and mobiles, businesses need to provide clear rules to help employees maximize their productivity while also protecting sensitive information.

For tips on the mobile workforce, please visit the Shred-it Resource Centre for more information. You can also stay informed with Shred-it on Facebook and LinkedIn or you can follow us on Twitter at @Shredit

Our pick of recent high profile data breaches and their impacts:

Staples – Staples recently confirmed that the retailer is investigating a potential breach, but no details are available as to how many stores have been impacted. According to reports, multiple banks had identified a pattern of credit and debit card fraud, suggesting that several Staples locations were experiencing a data breach3.

Sourcebooks – In an ironic turn of events, Brian Krebs reported that Sourcebook, the publisher for his upcoming book on cybercrime, Spam Nation, suffered a data breach. According to the publisher disclosure letter on the California Attorney General’s website, the breach occurred through a vulnerability in the company’s shopping cart software. April through June 2014, the credit card numbers, billing information, and some account passwords were compromised for more than 5,000 shoppers4.

Penn Highlands Brookville – A Pennsylvania hospital has confirmed that approximately 4,500 patients may have been impacted in a potential data breach. A third party vendor, which held the patient records, was hacked. As a result, patient names, addresses, dates of birth, driver’s licence numbers, Social Security numbers, phone numbers, insurance information, medical information, and gender may have been compromised. As a precaution the hospital is notifying patients of the recent hack until they can confirm the extent of the breach5. 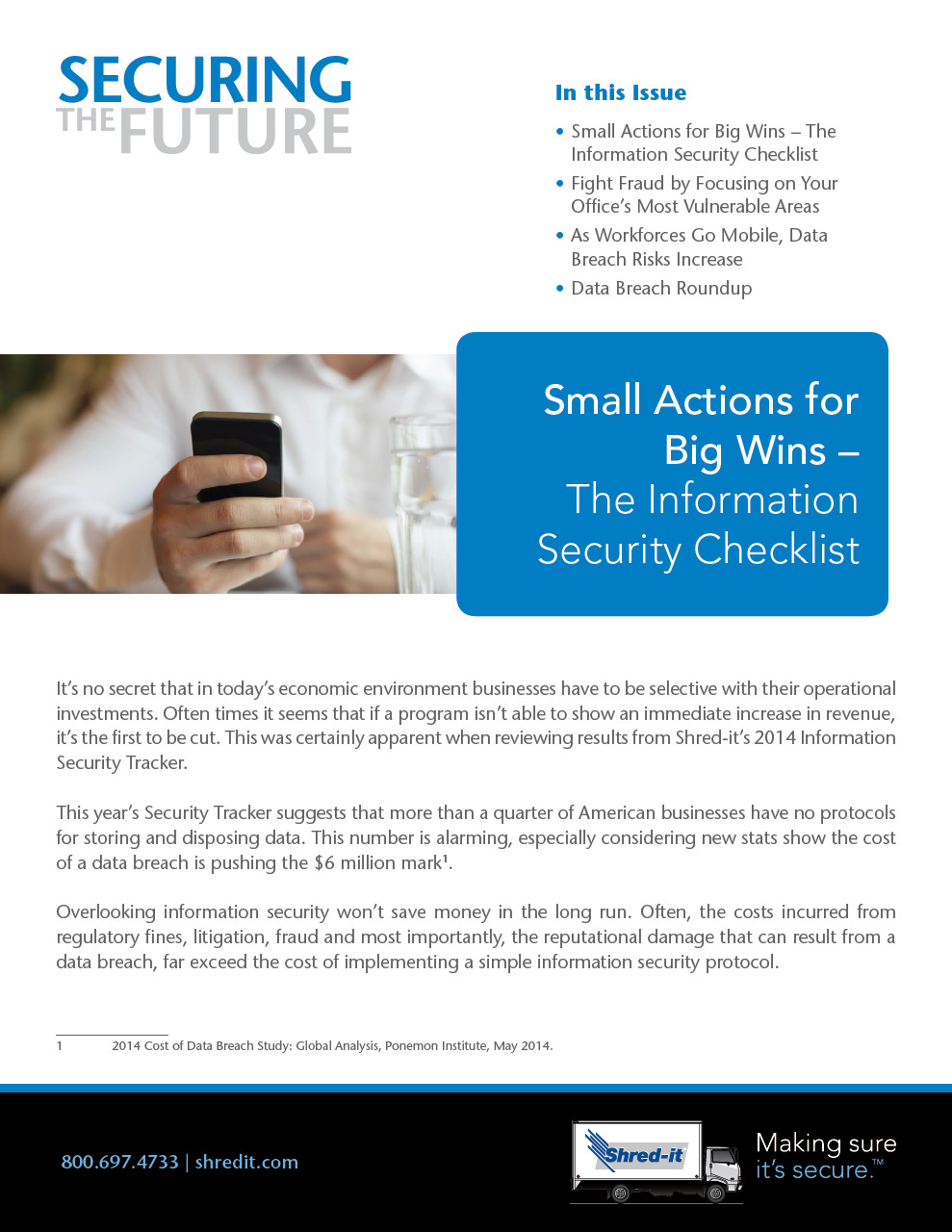 You have been added to our email list and will receive communications periodically.